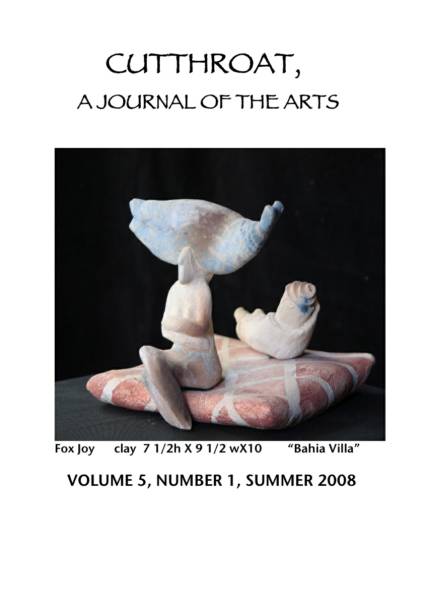 I'd like to take a moment to direct our readers to some hot new fiction available now-- free!-- and written by me:

My story "All's Fair" is in the new issue of Cutthroat, which you can download in its entirety, HERE. It's a pretty large PDF (a PDF of the entire journal), but the story is worth the wait: it's a violent story of a violent man and the woman who loves him -- or thinks she loves him, until she sees a flicker of weakness in his eyes. It's got gun play, carnies, a blood-stained alien doll, and an ending you won't expect. If you have trouble with the download, let me know: I'll help.

Another story of mine, "Invidia," is in SPECS, which is now available for purchase. This is a flash (super short) piece in the voice of a 51-inch rear projection Sony television set. Bring a second pair of pants.

Also coming soon, "On Earth" in Relief -- the same issue in which Brian's epic, Editor's Choice Prize-winning, poem "Hall Raising" will appear -- my story was previously featured on this blog HERE ("Publishing Atheists in a Christian Mag").

My "Last Days of Princess" (the story that Dorothy Allison said "bout ripped my heart in two") will be in the next issue of Louisiana Literature. It is the story of a very old dog and the people that love her, and kill her, twice.

I'll post more on these when they come available. (You can also check my website: Amy Letter.)