Musical options and the Randon Ten

There are a lot of really incredible things about living in south Florida--the weather, the cultural variety, the food, the fact that you can be cursed at in traffic by fifteen different people in thirty-five different languages. There's even a decent local music scene, if you look for it hard enough.

What we don't get down here, though, is a lot of great national acts. I guess it's because we're not really on the way to anywhere. We're okay as a beginning or ending spot if you happen to live around here, but there's really not a natural "next gig" once you get down into the Broward/Dade part of Florida. Which is why, more often than not, the emails I get from Ticketmaster touting the coming shows look a lot like this: 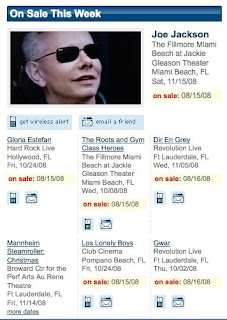 Yeah, that's right. The big act that Ticketmaster is excited about this month is Joe "Is She Really Going Out With Him" Jackson. Gloria Estefan fits into the "local star" category, and then the rest are Los Lonely Boys and The Roots, neither of which I'd mind seeing, and Gwar, which might have been funny 15 years ago, but not today, at least, not for me.

And Mannheim freaking Steamroller. Well, it is south Florida, once known as "heaven's waiting room." They'll probably sell out in an hour.

Here's this week's Random Ten. Hopefully my snarkiness toward the live music options hasn't resulted in a karmic backlash of epic proportions. Here we go.

Yes, that is a mighty schizophrenic random ten, to be sure. Leave yours in the comments.