Were I a believer, it would be tempting to look at Hurricane Gustav as proof of that proposition. John McCain, who has the planet's bloodiest albatross hanging around his political neck, might be faced with a repeat of said albatross's greatest domestic failure during the week of his nominating convention.

Taking no chances, city officials began preliminary planning to evacuate and lock down the city in hopes of avoiding the catastrophe that followed the 2005 storm. New Orleans Mayor Ray Nagin left the Democratic National Convention in Denver to return home for the preparations. Gov. Bobby Jindal declared a state of emergency to lay the groundwork for federal assistance, and put 3,000 National Guard troops on standby.

Forecasters said Wednesday Gustav could strengthen to a Category 3 hurricane with winds of 111 mph or higher in the next several days before hitting somewhere between the Florida Panhandle and Texas.

Personally, seeing as I have friends and family in the region, I hope the storm whirls around in the Gulf and spins itself out before it goes ashore and beats the hell out of anyone, but there's absolutely no chance that will happen. I'm glad to see that the state and local officials have learned a little something from the last time hurricanes came through.

But it can't help McCain's prospects that some of the media attention that would normally be given to his convention coverage be drawn off to cover storm damage, especially since bloggers (like me) will helpfully remind people what he was doing when Katrina came through three years ago. 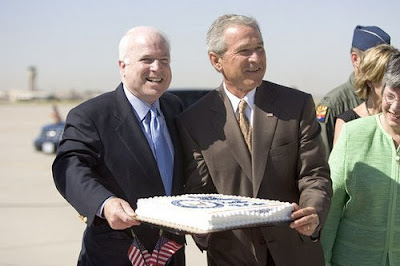 Happy Birthday, Senator. Keep your head above water next week.