Women in the New Doctor Who

There's a lot that can be said about the old Doctor Who(s): cheesy story lines, silly special effects, barely-scary baddies... and give me a few hours and I'll say way too much about it. For now I just want to talk about the misogyny, which is unmissable. The Doctor is a cheeky cocksure playboy who is more than a little dismissive towards his female companions, most of whom fit an insulting stereotype: the girl-next-door, the harpy... and all of them eye-candy.

I should point out that this makes the old Doctor Who(s) absolutely indistinguishable from 99% of the programming that's ever been produced.
The new Doctor Who is a miracle of progressive story telling. Setting aside the fact that most of the stories are really well put together, creative, funny, intense, clever, etc., the new series routinely casts multicultural characters and biracial couples, uses strong women as central characters, and when it comes to sexual politics, well, we're talking about the series that brought us the miracle of Captain Jack Harkness, the Omnisexual hotpot from the 51st Century.

This series has given us a series of three (so far) female companions: Rose Tyler (played by Billie Piper), Dr. Martha Jones (Freema Agyeman), and Donna Noble (Catherine Tate).

Rose Tyler is amazing. She's a streetwise kid who grew up in the London projects. In the first episode she saves the Doctor's life -- and Earth -- with cleverness, heroics, and strength. And she only gets more awesome from there. She is the Doctor's match in every way. When she's lost (to another dimension) at the end of the (completely riveting and intense) second season, the Doctor (quite forlorn) returns to his TARDIS to discover a big loud red-headed human named Donna -- more on her in a second. The big knock against Rose Tyler? She's too good to be true.

Martha Jones is a medical doctor. She's brilliant, gorgeous, and, given time, she also saves all humanity. The big knock against this character (from my point of view) is that she has a crush on the Doctor. She leaves after a season because she's sick of making a fool of herself over him. The good news is that once she leaves the Doctor she uses her skills and knowledge to have this awesome alien-fighting career on Earth, becoming a recurring character in both Doctor Who and Torchwood (where Captain Jack makes Sexy out of Cardiff Good and Long).

And then there's Donna. (I said I'd come back to this.) Donna Noble is, without a doubt, my favorite fictional character, ever ever ever. She's not young. She's not skinny. She's not clever. She's not brave. She's not likely to save the world. She has no romantic interest in the doctor at all. What is she? She's a real, complex, very funny, tricky, tough, totally human person. And let me tell you (if you haven't noticed): such characters, in the female variety, are very hard to come by, rare as 12 lb diamonds.
In the first episode of the new series, which is also the first episode with Rose, Rose swings down to save the day (surrounded by aliens and danger), showing superhuman courage, strength, and cleverness. In The Runaway Bride, Catherine Tate (as Donna) parodies this moment with classic comedy timing -- and falls flat on her face. In every way that Rose is too perfect, Donna is perfectly human and flawed.
In the first episode of the third season, the Doctor kisses Martha so she'll have alien DNA on her and distract some intergalactic stormtroopers. From that moment Martha crushes madly on the Doctor, and their entire relationship is defined by her googly-ness for him. Fair enough. But then there's Donna: when the Doctor tells Donna that he just wants a mate, she says, "you just want to mate?! You're not mating with me, alien boy!" They're buddies, often in conflict with one another -- passing for brother and sister when they visit ancient Pompeii (he goes by Spartacus -- and so does she).

It's a kind of relationship -- a non-sexual friendship between an man and a woman -- that is very real, and very important, but not one that gets portrayed much in fiction. Or if it is, one of them is probably gay, or both of them are pre-adolescents. But here are two adults -- 40 and 903 -- from different planets, and different sexes -- and why are they traveling the universe in a blue box? Is it to wind out some sexual tension? No: it's because they want to have fun, skirt danger, and free some enslaved races. Awesome. Of course it's easy to miss this. While I've been lapping up these story elements with a "where have you been all my life" sense of glee, Brian didn't notice (or didn't believe?) that Donna wasn't a sex interest in the story. You know what? I can understand that. We've all be so brainwashed by the stories we see to believe that women are there for one thing ... who can blame a man for not noticing that she's not? We actually got into a bit of a scuffle when he made an offhand comment about how if all three companions got together (and they will, at the end of this season), they would fight. Why would they fight? It's an absurd suggestion. Yet it's what we automatically assume will happen in a story because so many stories have come before and played out that exact scenario -- which is nothing more than an ego-feeding male fantasy.
The writers of Doctor Who brilliantly lampooned this in the 4th episode of the season, when Martha and Donna meet. He admonishes them to "don't fight!" to which Martha replies "you wish," and she and Donna go on to be fast friends.
It is, in short, the best shit on TV. If you're not watching Doctor Who, you're missing out on the sharpest humor/social and political commentary out there today. The first episode of season 4 (which features the wonderfully not-slim Catherine Tate) is about an alien species using our obsession with losing fat as a sick (and hilarious) way to propagate their species (hint: the company's slogan is "the fat just walks away!") -- the most recent two-part battle with the Sontarans turned our cars against us as weapons, to gas us to death. And the 3rd episode of the new season is about freeing a race (the Ood) from their "invisible" slavery. (They're enslaved by future humans, by the way.) 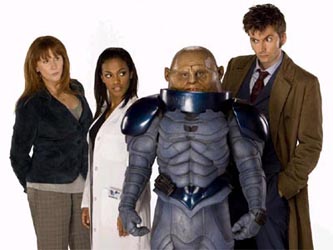 But the best thing, to my mind, about the new Doctor Who is how it has created this wonderful space for female characters to live and grow and save the world. And Catherine Tate's Donna Noble is the best character to appear in anything, ever ever ever.