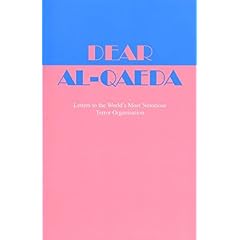 This is actually going to be a pretty mixed review; nonetheless, I would urge you to buy and read Dear Al-Qaeda (Letters to the World's Most Notorious Terror Organization), by Scott Creney.

This book was part of what I consider in hindsight my most valuable find at the NY AWP bookfair -- four books from Black Ocean Press.

The press is small, and makes quirky (good!) choices for who it publishes. Of the four I bought, this one is definitely the most unusual.

The conceit is that the book is written as a series of letters to Al-Qaeda. The letters are funny, although clearly it is a sort of dark, misanthropic humor. At first the letter-writer lives in Boston, then he and his girlfriend go to Florida to try to earn more/save more money (an odd choice, if that is your goal). Most usually the letter-writer complains about some wretchedly superficial or phony part of American culture, and makes a polite request for Al-Qaeda to blow it up. He makes this suggestion about the bank that holds his student loans (shades of Fight Club), the Thanksgiving Day Parade and a featured float singer who sings, "All I have to do is think of me and I have peace of mind," a "Death Metal" concert ("Show them who the real badasses are"), and various people he serves in his catering job (oddly he requests that Al-Qaeda not blow up the debutantes -- perhaps the author was just trying to throw us a curve). The majority of this is both insightful and funny, especially in the first half of the book.

Then something happens. Around 2/3s of the way through the book, the observations go from insightful and funny to just mean-spirited and narrow minded. The things the letter-writer chooses to pick on become much, shall we say, easier. Okay, I'll just call it what it is: pot-shots at barn-sized targets. He mocks old people giving themselves a formal dance at a retirement home. An old fat lady ordering donuts too slowly. He spends a page describing the horrible pink/turquoise combination often found in Florida on Art Deco buildings, as though he's the first to notice it, and as though the color scheme were ripped off of the opening credits to "Miami Vice" (and not the other way round). The fact that the state of Florida is shaped like a penis comes in for a few two many "cute" quips. The letter-writer proposes a new reality show in which contestants must guess whether the fat people motoring around Wal-Mart on their little scooters are genuinely crippled or just fat and lazy (and he suggests proving it one way or another by coaxing them to their feet with a donut). The letter-writer's lack of humanity starts to take over the stage.

There is art in this, of course: his transformation into a man who fails to see the humanity around him, an analog to Al-Qaeda. Particularly telling for me was his description of his co-workers at one of his jobs as being completely uninteresting, sad, defeated people. I've held close to 40 jobs in my life (including the job he describes here, as an inventory counter), and I've never failed to find something interesting about the people there (and in fact, the inventory counters were some of the wackiest people I'd ever met!). So by my eye, he's just becoming tired of himself, unwilling to live, just sort of droning through his days. As I said, there is art in this.

At the end of the book a predictably traumatic thing happens to him and his girlfriend (no spoilers!), they split up, and the book comes to a stuttering denouement when the final page announces, "Scott Creney no longer lives in Florida." I would urge everyone to read this book, because it's fascinating. But the way the book tries to turn all "Scott's" issues into "Florida" -- as though Florida were the problem -- is kind of stupid. And once again, kind of easy.

The real problem with this book, as I see it, is the 10-letter hyphenated word on the top left corner of the back cover: NON-FICTION. First, I do not believe this is non-fiction. There are too many things in the book that reek of artful artifice -- they are wonderful and enjoyable, but they are not factual. For example, early in the book a letter claims Scott is going to reproduce a conversation he overheard; what follows is several pages of gloriously paced great art, but it isn't an overheard conversation. Even if the author swears up and down every word is true, the conceit itself is fictional. Al-Qaeda did not receive, Scott did not send, Scott did not intend to send, these letters to Al-Qaeda. If the form is fictional, the book is fictional, even if he is including details of his life, and our shared cultural life.

And there's a blowback to the book being labeled NON-FICTION. Because of that word, I am inclined to dislike the author when I begin to dislike the letter-writer. And while I can dislike a narrator or protagonist and still love a book, it becomes a lot harder when the author claims, "this is all true! This is really me!" The book needs to be fiction just so the reader can focus on the story, and not be distracted by a growing distaste for the author.

So in the end, I could suggest that the book would be better if its narrator/author were more sympathetic, or I could just suggest that you will LOVE this book so long as you scratch out the "NON" on the back cover. The first suggestion changes the whole book; the second suggestion changes how the reader perceives it. And I think the problem really is the latter. So long as this is fiction, it is wonderful. It's that word, NON-FICTION, that's fucking everything up.

Where's my sharpie? On my copy, I'm just gonna blot it out.