How Katrina has destroyed the "small government is good" myth. 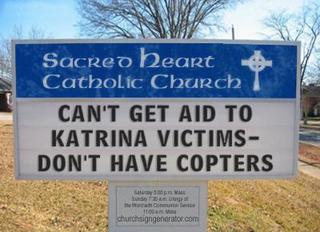 Imagine, for a moment, that the federal government's response to Katina, meager as it has been thus far, didn't exist whatsoever, that public aid had been solely the purview of private charitable organizations and the free market. How much more horrific would the death and destruction have been?

It's time for small government advocates to face up to a harsh reality--there are a number of actions that the free market or charitable organizations either can't or won't handle. You can't expect the ICRC to invest money in C-130 planes to do food drops or 5-ton trucks to get into storm zones or paramilitary outfits to provide security so a place where even the most basic services don't exist doesn't descend rapidly into anarchy. You can't expect the Catholic Church to do that either, and if you think Halliburton would put assets into place based on what they thought they could charge the area residents, then you're dreaming, even if you assume they had the capability to respond.

I think government's most basic duty is to oversee those situations that individuals cannot handle, whether that's road construction or the stabilization of society or hurricane relief or national security, and it ought to oversee those situations with no regard as to the financial standing of its citizens. Now, that's a bit of a naive view, because class always comes into play, as we've seen in New Orleans and the Gulf Coast, but the basic assumption is true, I think, and what we've seen here is a perfect example of why government has to be large.

But government, our government, is ostensibly "of the people, by the people and for the people," and if it's going to live up to that ideal, then it's got to be big, because there's a lot of people in this country who have the right to depend on it, especially when the world goes to shit around them. It's a right, because it's our government--we pay for it, we abide by its rules, we give up freedoms in exchange for the security and stability it provides for us. In return, it has to be big enough to provide that stability and security.

Size isn't everything, I know. The former Soviet Union had a massive and sprawling government and it was just as inefficient and incompetent in responding to natural disasters as our government has been to Katrina, so simply making it bigger isn't the answer. Most people who come here know that the federal government has expanded tremendously under Bush, in the form of corporate welfare and giveaways to industry. There's a need for greater competence and accountability and efficiency in our current government. But that's not the point I'm making here.

My point is that there's a floor as far as size is concerned below which government is no longer able to respond to the needs of its citizens, and whenever a government pawns those responsibilities off on private industry or onto private charity, it's screwing over a portion of its citizenry, and it should be no surprise that the portion getting screwed is the one least able to care for itself.